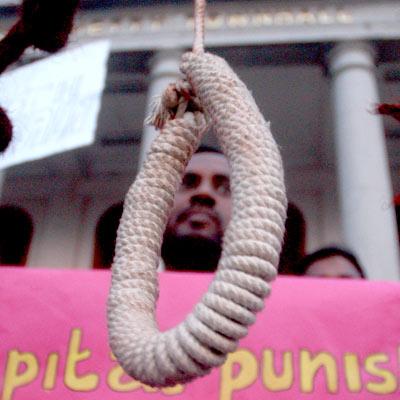 China is considering trimming nine crimes from the list of offences punishable by death, state media said on Monday, as the ruling Communist Partyconsiders broader reforms to the country’s legal system.

A draft amendment to China’s criminal law, which includes the use of the death penalty, was submitted for initial review to the country’s National People’s Congress, the official Xinhua news agency said.

Crimes that would be exempt from capital punishment under the amendment include “smuggling weapons, ammunition, nuclear materials or counterfeit currencies; counterfeiting currencies; raising funds by means of fraud; and arranging for or forcing another person to engage in prostitution”, Xinhua said.

The crimes of “obstructing a commander or a person on duty from performing his duties” and “fabricating rumours to mislead others during wartime”, are also under review, the news agency said. Officials had previously said that China would review the application of the death penalty, which applies to 55 offences, including fraud and illegal money-lending.

China guards the number of people executed every year as state secrets.

The reduction in death penalty crimes, however, is not expected to greatly reduce the number of executions per year, scholars have said.

The Communist Party, worried about rising social unrest and anger over land grabs,corruption and pollution unveiled legal reforms aimed at improving judicial independence at a key meeting last week. The Party has stressed that it will remain in overall control of the judiciary, and despite the move to implement legal reforms, few analysts expect significant political change any time soon.

How to watch Trolls World Tour in a UK right now

Newspaper is your news, entertainment, music & fashion website. We provide you with the latest breaking news and videos straight from the entertainment industry.
We are your all-access pass to all the A-List stars around the globe.
Contact us: [email protected]