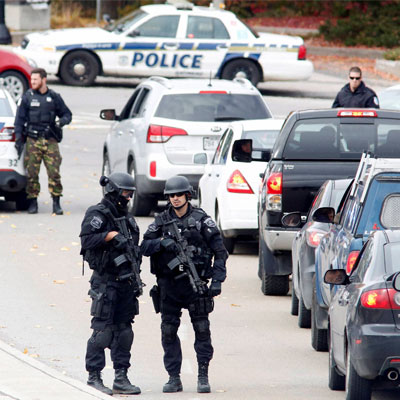 The man who killed a Canadian soldier and attacked the country’s parliament building last week made a video of himself before hand, evidence he was driven by ideological and political motives, police said on Sunday.

The Royal Canadian Mounted Police said in a statement they were conducting a detailed analysis of the video made by Michael Zehaf-Bibeau and could not release it at this time.

Zehaf-Bibeau, 32, stormed into the parliament building with a rifle last Wednesday after shooting and killing Corporal Nathan Cirillo at a nearby monument to Canada’s war dead, police said. Zehaf-Bibeau was shot dead in the building.

The federal police force said on Sunday it believed a knife carried by Zehaf-Bibeau was retrieved from his aunt’s property, but added it was still looking into the origin of the gun he used.

“It is an old and uncommon gun. We suspect that he could have similarly hidden the gun on the property but our inquiries continue,” the statement said.

The RCMP also said Zehaf-Bibeau had worked in Alberta’s oil fields and used the money he made to finance his activities in the days leading up to the attack. He had been living in an Ottawa homeless shelter just before the shooting.

The police were still investigating Zehaf-Bibeau’s interactions with numerous people in the days before the attack to find out whether these could have contributed to or facilitated his crime.

Security in normally relaxed Canada has been tighter in the days since the shooting. Two days earlier another man described by police as radicalized drove over two soldiers in Quebec with a car, killing one.

The attacker, 25-year-old Martin Rouleau, was shot and killed by police.

The attacks, which police said were the work of Canadian citizens who were recent converts to Islam, came the same week as the government sent additional jet fighters to the Middle East to take part in air strikes against Islamic State militants.

Canadian officials vowed to keep up their involvement in the military campaign despite the attacks and planned to reopen the parliament building to the public on Monday, though they said they would begin locking the doors overnight.

Headed for Saudi Arabia, not Syria

The mother of Zehaf-Bibeau denied in a letter to the Canadian news agency Postmedia an RCMP statement that she had told them her son had intended to travel to Syria, a hotbed of militant activity.

Her son, who came to Ottawa from Vancouver seeking a passport, had wanted to travel to Saudi Arabia to study the Koran, Susan Bibeau said in the letter.

The nation also prepared for two funerals, with Ottawa victim Cirillo to be laid to rest in his hometown of Hamilton, Ontario, on Tuesday. A funeral for 53-year-old Warrant Officer Patrice Vincent was set for Saturday, November 1, in Quebec.

On Sunday, about 100 police, firefighters and other emergency workers held a disaster-response drill in downtown Toronto’s deserted financial district.

The drill had been long planned and was not a reaction to the twin attacks, though some acknowledged it took on a more urgent tone in the wake of the incidents.

“We had to be very specific with our strategic briefing after what happened in Ottawa,” said Daniel Martin, a staff sergeant with the Toronto Police Department. – Reuters, October 27, 2014.

How to watch Trolls World Tour in a UK right now

Newspaper is your news, entertainment, music & fashion website. We provide you with the latest breaking news and videos straight from the entertainment industry.
We are your all-access pass to all the A-List stars around the globe.
Contact us: [email protected]